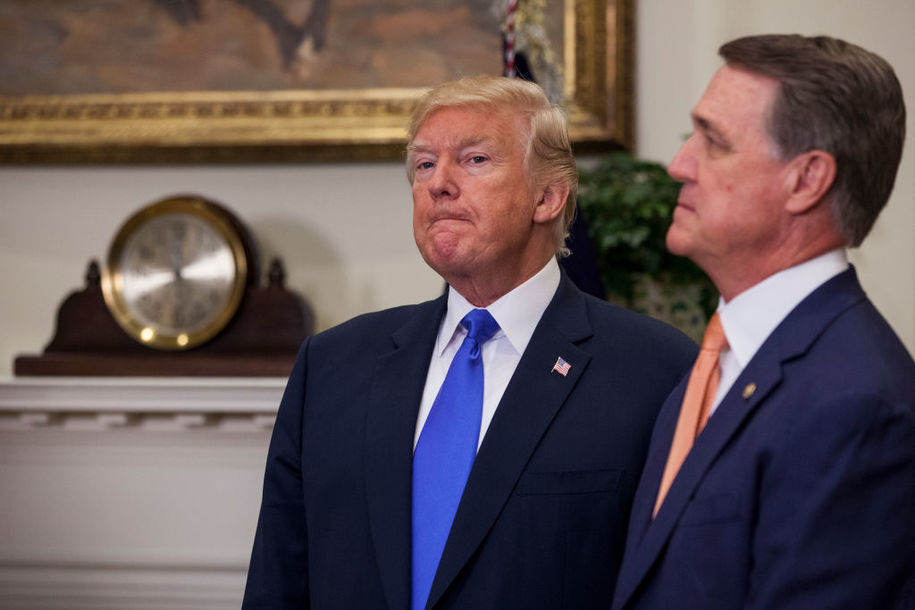 Othering is a nasty thing, and it goes beyond mispronouncing names. In this case, Perdue even managed to slide in an “Obama” in the last beat of his absolutely intentional butchering of Sen. Harris’ name.

We are so much better than this. pic.twitter.com/9AvoQK4RdN

We are so much better than this. pic.twitter.com/9AvoQK4RdN

The willful othering of Sen. Harris demonstrated by both Trump and Perdue, among other Republicans, is more than a minor error: It’s a dogwhistle. It’s an attempt to minimize and distract from someone’s credibility. It’s a reminder that those who are different are a threat.

Writing for the San Francisco Chronicle just days after Harris was announced as Joe Biden’s running mate, Lauren Hernández and Rachel Swan dug deep into the impact of othering … and offered this parallel for those who would make excuses for those who do it, courtesy of Nicole Holliday, an assistant professor of sociolinguistics at the University of Pennsylvania.

“There are some people that get the default assumption of basic respect, and sort of basic benefit of the doubt. I like the example of Pete Buttigieg,” Holliday said, referring to a former Democratic presidential hopeful whose name was also mispronounced for a period of time. “People learned to say Buttigieg. It was a thing for like five minutes. He made a T-shirt, and that was it. I think she’s gonna have a much more uphill battle on people getting her name right, and that is tied to the fact that people don’t necessarily want to give her the benefit of the doubt. Even people who agree with her policies, even people who plan to vote for Biden, might still harbor some of that internalized negative ideologies about women, about immigrants, about Black people—that she has to overcome.”

Nina Davuluri, who was the first South Asian to win the Miss America crown in 2014, wrote a remarkable, must-read story for Refinery 29, demonstrating how othering has shaped a generation of Americans like herself.

For many second-generation South Asians, the assimilation conversation is often connected to “equal opportunity.” One South Asian-American couple I know encapsulated this by naming their children Josh and Marie to “end name bias.” One of the parents told me, “The teasing of my South Asian name was very painful at a young age, and I felt my parents made an insufficient effort at assimilation into the society they chose to live in. It was very important to me not to repeat those mistakes for my children.” It was recently reported that our community’s achievements have led us to being dubbed “the other 1%”: From New York City private school applications, to college admissions, to job interviews, many parents have believed that giving their children non-South Asian-sounding names would increase their chances for success in this country.

She also names names—of Republicans, that is, who altered their names and found success in the very party that refuses to say the future Democratic veep’s name right.

The type of treatment Harris and I have received is unfortunately nothing new to South Asian people in positions of power: Rep. Pramila Jayapal recently had to correct the pronunciation of her name in a Congressional hearing after a Republican congresswoman repeatedly mispronounced it. There seems to be a party divide among South Asian politicians when it comes to who changes their name. Former South Carolina Governor and UN Ambassador Nimrata Haley uses her middle name “Nikki.” Piyush Jindal, the former governor of Louisiana, was a child when he started going by “Bobby,” after a character in The Brady Bunch, and has further distanced himself from his Indian roots as an adult. Haley and Jindal are both Republicans. Democratic politicians of South Asian descent like Harris, Jayapal, and Rep. Raja Krishnamoorthi of Illinois, have preferred not to change their names. Others, like California Congressman Rohit “Ro” Khanna and Hoboken, NJ, Mayor Ravinder “Ravi” Bhalla, use common nicknames. Dalip Singh Saund, the first Indian-American to be elected to Congress in 1957, a Democrat from California, went by his original name. This leads me to wonder whether Republicans are more eager to change their names in order to appeal to their core constituents. But is that worth sacrificing our identity?

No, it’s not. And it shouldn’t be. But as noted by the San Francisco Chronicle, messing up people’s names and refusing to even try to do better is a chronic flaw among Americans.

Sanjay Puri, the founder of the United States-India Political Action Committee, told The Chronicle that pronouncing someone’s name correctly is basic respect. He said American society is the “worst” at taking the time to acknowledge the pronunciation of someone’s name, but said he hopes people will at least make an honest attempt at getting it right.

“It’s important because sometimes names do have a lot of meaning,” Puri said, pointing to Harris’ first name. “I do understand that people can make mistakes, but make a genuine effort.”

I’m guilty of othering names that felt odd on my tongue, and I was chatting with my colleagues and the founder of this site today about the day I stopped doing it. While I never mocked names that sound different, or meant any harm, in my early 20s, I had a nasty habit of trying just a few times to say a challenging name before giving up, just like the entitled Americans described by Puri. “Can I just call you___?” I’d ask. “I’ll call you ___,” I’d declare, as if I had the right to rename somebody.

Then someone flatly told me “no,” I would do no such thing. And you know what? I learned his damn name, and we’re still friends today. I have never tried to assign a new name to anyone since. In 2018, I was fortunate enough to meet our future vice president, as part of the Daily Kos team interviewing people at Netroots Nation in New Orleans. She shook my hand warmly, and after I introduced myself, she said, “Hello, Jessica, I’m Kamala.”

My internal jaw dropped: I’d been saying her name wrong for years. And for a few weeks after that day, I kept saying it wrong, at first. I’d self-correct and move on. I started correcting others without apology, particularly after she announced she was running for president. “Like ‘comma-la,’” I’d say, and the conversation would continue, because my friends are not assholes.

And so we must look past the assholes. The Tucker Carlsons, the Donald Trumps, and the David Perdues of the world—arrogant white men who have likely faced a mispronunciation of their name—can go kick rocks, honestly. Their devoted followers may cheer and jeer when these losers reach for the lowest hanging of fruits.

With this outlook in mind, Davuluri, who faced disgusting racist attacks after her Miss America win, bookends the hard facts of othering with the sheer joy she’ll feel voting for a woman named Kamala Devi Harris on Nov. 3, noting that “seeing a name like ‘Kamala Devi Harris’ on the ticket for Vice President means that it is possible to keep the core of our identities and be in positions of power.”

Hell yes it does. Let’s make sure she (and Joe) don’t just make it to the ticket. Let’s get them to the top, and send Trump and Perdue back to the dank holes from which they came.

Will you donate $3 or more to help Jon Ossoff send David Perdue packing?